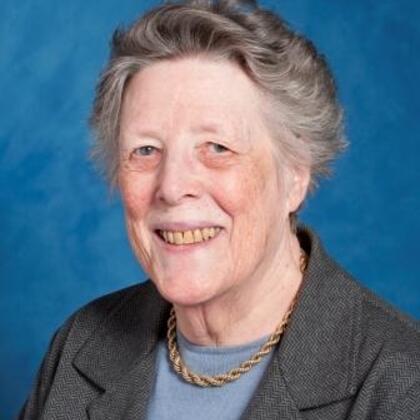 PKES is very sad to note the death of Victoria Chick on 15 January 2023. She founded PKES (which was originally named the Post-Keynesian Economics Study Group) in 1988 with Philip Arestis.

Victoria Chick was born in Berkeley, California in 1936, the year that the book which would be central to her life’s work, Keynes’ General Theory, was published. She was one of the foremost experts on Keynes and one of the most important interpreters of his work.

She took her Bachelor’s and Master’s degrees at Berkeley where she was taught by Hyman Minsky, with whom she maintained a friendship after leaving California for London in 1960 for postgraduate study at the London School of Economics (LSE). She took an academic position at University College London (UCL) in 1963.

Victoria Chick’s book, The Theory of Monetary Policy, published in 1973, which drew on her teaching at UCL, criticised both Keynesianism based on the IS-LM model and its monetarist opponent. She attended the December 1971 American Economics Association meetings in New Orleans at which Joan Robinson delivered the Ely lecture. At these meetings Chick also attended a meeting of like-minded economists convened by Paul Davidson at which Joan Robinson suggested the name post-Keynesian to refer to their shared approach to economics.

Following her rejection of both of the main contemporary approaches to macroeconomics, she returned to the study of Keynes’s General Theory and began to teach it to her students. This led to her landmark volume, Macroeconomics After Keynes, published in 1983, which confirmed her status as one of the most important interpreters of Keynes and contributors to the emerging post-Keynesian approach.

In addition to her books, she published over a hundred papers and book chapters, exploring themes including monetary theory, banking, finance and methodology, as well as macroeconomics.

In 1993, Victoria Chick became Professor at UCL. She retired in 2001, becoming Emeritus Professor. At her retirement party, Meghnad Desai spoke of how – in spite of all the challenges operating as dissenting economist in an orthodox environment – Chick had lasted the distance, and concluded that she had "won".

In 2016, both Victoria Chick and The General Theory marked their 80th birthdays. A conference was held in London to celebrate and commemorate these anniversaries with contributions from Chick alongside other distinguished scholars. Charles Goodhart remarked that in the fifty years he had known her, Chick had been “an oasis of sanity in a desert of neo-classical theorising”.

She continued to write and contribute to seminars until her death. She contributed an essay, “Should equilibrium be abandoned by heterodox economists?” to her friend and regular co-author Sheila Dow’s festschrift. Later this year, Routledge will publish their Handbook of Macroeconomic Methodology, edited by Victoria Chick, Jesper Jesperson and Bert Tieben. A scholar to the very end, the volume includes her final contributions to a field that she regarded as vitally important to economics and better understanding Keynes.

Victoria Chick was known to many as a fiercely intelligent yet open, approachable and witty economist with in irreverent sense of humour. She devoted a great deal of time to students and younger scholars, and was a supporter of the student movement, Rethinking Economics. She was (or at least said she was) embarrassed when they in turn described her as “a legend”. She was a great friend to many of us.

In her introduction to the collection of her essays published in 1992, On Money, Method and Keynes, Victoria Chick adopts the motto of a California university college: “The Pursuit of Truth in the Company of Friends”. She will be greatly missed by the post-Keynesian community.